Therapeutic Strategies for the Treatment of PC1/3 Deficiency

Prohormone convertase 1/3 (PC1/3), encoded by the PCSK1 gene, is a serine endoprotease involved in the processing of a variety of proneuropeptides and prohormones. Humans who are homozygous or compound heterozygous for loss-of-function mutations in PCSK1, exhibit a variable and pleiotropic syndrome mainly consisting of obesity, malabsorptive diarrhea, and other endocrinopathies. The majority of the PCSK1 null patients suffer from early-onset obesity and hyperphagia. Furthermore, nearly 1% of extremely obese Europeans exhibit rare heterozygous PCSK1 mutations that result in partial loss of PC1/3 activity and are associated with profound effects on metabolism. Despite not displaying the complex endocrine phenotype of PC1/3-deficient subjects, carriers of these mutations exhibit an 8.7-fold increased risk of obesity over subjects lacking these mutations. In addition to rare PCSK1 variants, numerous genome-wide association studies (GWAS) show a convincing association between certain polymorphisms in the PCSK1 gene that are common in the population and increased risk of obesity.

The aim of this research project is to define the mechanisms of PC1/3 deficiency leading to obesity using Pcsk1 knockout mouse models, and to explore therapeutic approaches. As PC1/3 is expressed in different regions of the brain that are important for food consumption and metabolism including several hypothalamic nuclei known to function as centers for energy homeostasis such as the leptin-responsive proopiomelanocortin (POMC) and agouti related peptide (AGRP) neurons of the arcuate nucleus (Arc). Therefore, we will investigate whether the obese phenotype linked to hyperphagia of PC1/3-deficient mice is caused by an impairment of the melanocortin system in the hypothalamus, and to investigate whether the administration of melanocortin agonists can decrease food intake and body weight. 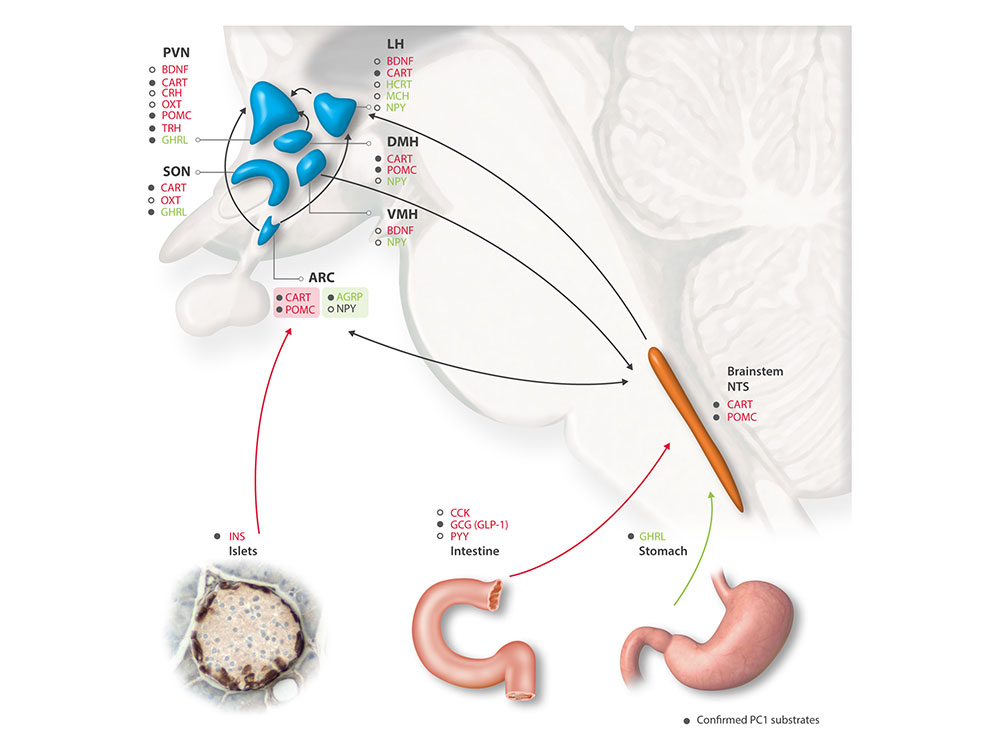